Some time last year I was invited to Yokohama Japan to work with artist Mari Ishiwata on a Homestay (guest from Africa ) project by Koh Kuroki, an art director from Japan whom I had met in June of 2011 while he was visiting Nigeria.

For one, I’m really excited about this trip because before now Japan, more specifically Yokohama, is a place I always heard about and I dreamed of visiting someday but I couldn’t have imagined it was so soon!?! So I was really really excited.
When I think Japan I think, Kimonos, wooden chalets, tea and even samurais with swords. That’s my stereotype on Japan, and its farrrrr from  true( except for the tea part) now that I have seen things for myself.


Right from the first sunrise (even though I slept till about 3pm of the next day) it was activities and visitors all the way. Two weeks is a short time to explore such a great place and at the same time create work but Mari and I are tried our very best.
Before my arrival Mari and I had been communicating by mails and Skype so we were able to create a rough plan of activities and the workshops we wanted to do, since we had a short time. Also on my part I tried to get acquainted with the waste objects that were available which I could use to create an art piece.

Now Japan recycles a lot so there weren’t many options like I have here in Lagos (if you know what I mean!), so basically pet bottles had to be “it”(even though it is also recycled but it was the easiest thing to collect) because there was so many and in different shapes and sizes, there were also other objects Mari had gotten in the house that they didn’t need anymore which I could also use.

So we kicked off with the photography project we planned, and we had volunteers dress up for the shoot. Even though I have always done photography, this would be my very first time using my camera as a tool to create an art project, it was usually parties, portraits and documentaries so it was really good to be able to direct my art in this direction other than sculptures and mixed media.

This project was based on "stereotypes and identity" using Japanese and African fashion to explore the topic. It was really hilarious getting ready for this shoot.


Here we were two young people clueless about traditional dressing, and struggling to get it right. On my part, I can’t tie a gele( headgear won by women here in Nigeria) I never wear one because I feel its very uncomfortable and its like carrying a burden on my head, but since I was taking some with me to Japan, and I didn’t want to disgrace myself and my dear Africa, I quickly took a crash course from my sister’s friend just a night before my trip.

It was terrible, and very frustrating, my hands ached  but I settled for two formulas and hoped I would get it right when I got there, after all even if I got it wrong they won’t know the difference(wink *wink*).
As for Mari it was nothing far from my experience, she couldn’t tie a kimono the right way either, she kept reciting the formula with her lips while she tried to wear it. With that I didn’t feel bad about my lack of knowledge on “African”fashion, it was a really hilarious moment, and at that point I started to discover more about my self as a person, an African and as an artist and it was clear that our topic on stereotypes was ideal for this project.

Anyway at last we came to a compromise. In our confusion, we created a cross between iro and buba( traditional attire won by Yoruba women) and the kimono called…..(still on it) somewhat a reflection of our image as young people in this very modern age, from different ends of the planet but sharing many similarities that stem from the influence of technology, western fashion and this era we exist in at present. 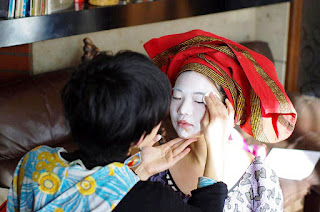 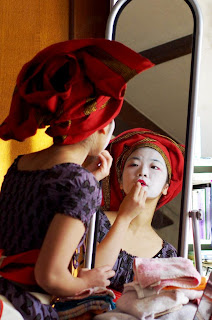 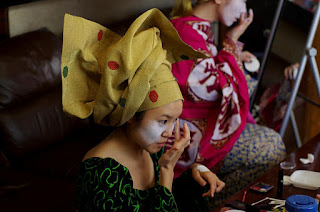 We also adopted the makeup style(the white face and red lipstick) used by traditional geisha women of Japan, as a way of blurring the identity of our models. Then again I see this as a metaphor of how young people like myself and Mari have been stereotyped and the true reflection of who we really are as people and especially as artists has been shaded by what is expected rather than what is. The reality is, we are more alike than we are different, and the traditions and cultures from the past have faded, evolved or are completely lost to the modern society we live in now .

Mari's drawing as a backdrop in the photographs make the images seem surreal, almost like a fantasy (like the tale of Alice in wonderland) a tale that exist only in stories but it’s the reality that exist in today's world. A topic I have slowly started to explore with mannequins.
By the way, the title of our exhibition was titled "An Anonymous Tale".
The images represent illusions of surrealistic events but the objects they hold in their hands are the only real things in the images (each volunteer was asked to bring something they cherished and loved), while all other objects and clothings found in each image are not from their personal possessions.

The real objects therefore act as channels of escape from this scene of illusions, the stereotyped world I live in today that has been created by people.
A staged photograph someone called it, truth be told, it was but it is life, and especially in this time I exist where the idea of beauty and character is fake and it is hard to differentiate reality from illusion, and more and more we begin to adopt a staged life. 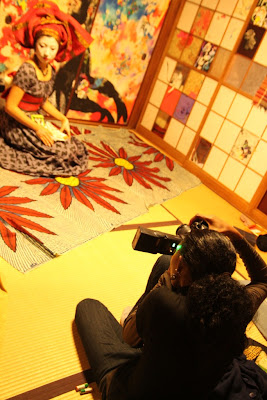 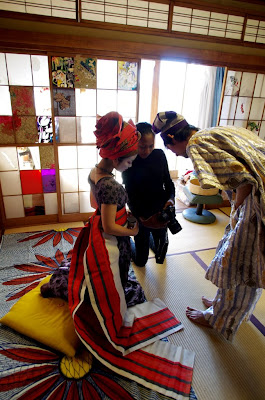 Long story short, at the end, the photo project was a success and it was a good start for other things that were to come and I had a great time.
I was really happy to see all these young people come over to see me, and chat with me and be a part of it even though we kinda had a little language problem but it was great still, after all there many other ways to communicate other than just speaking words.

We got great pictures from the shoot and do find below the final selection which was showed at the closing exhibition. And I must say my geles weren't so bad after all! yehhhhh! A big thank you to Asarin, Wakwak, Naddy, Aya, Caroline, Yota, Chiharu, and Akane.
Join me in some tea drinking from Japan in the story to come, and there's still my P.E.T bottle project as well. Thanks for reading. 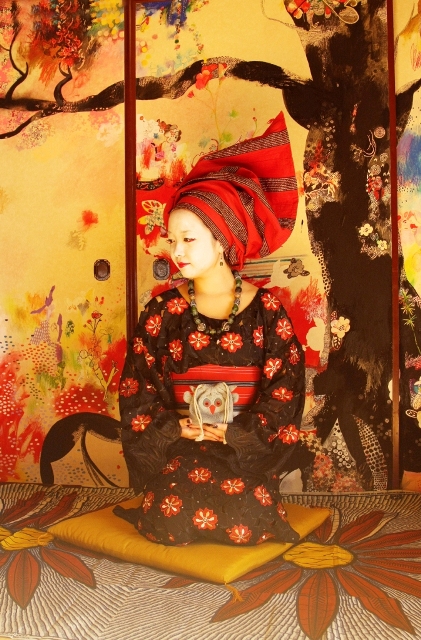 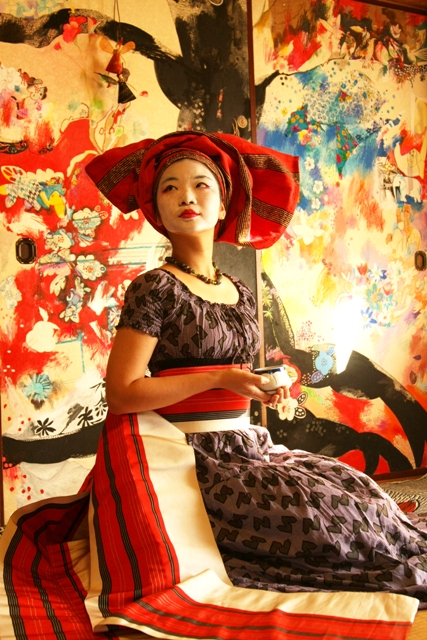 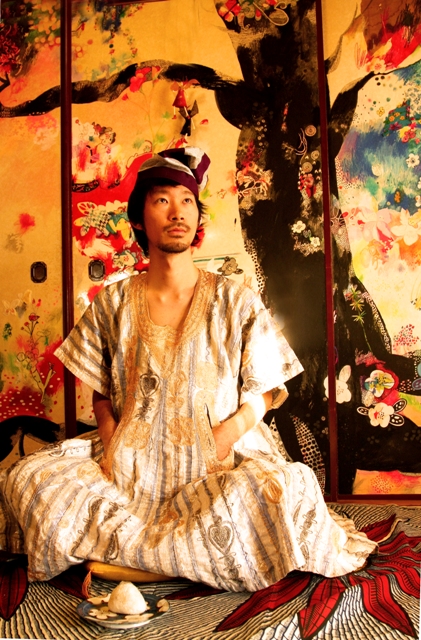 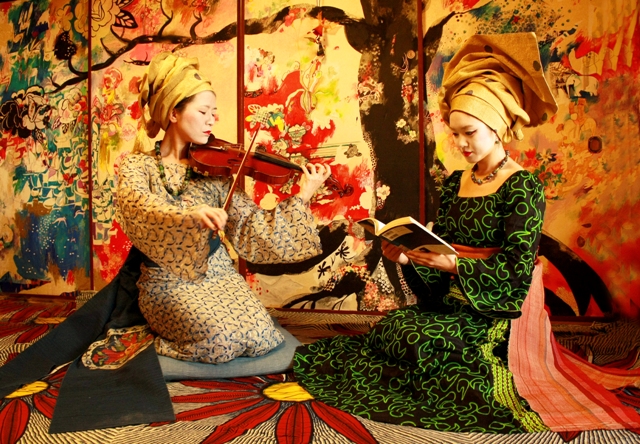 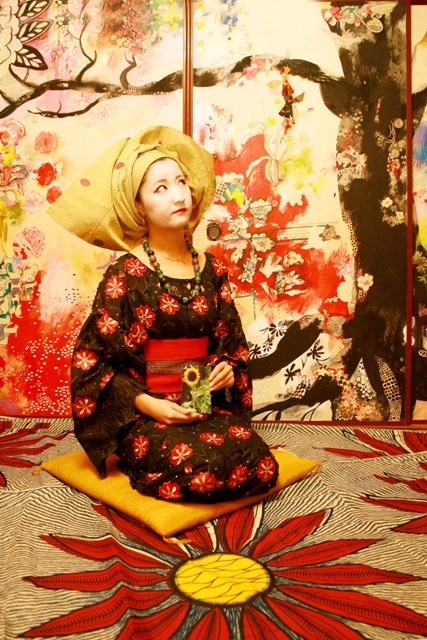 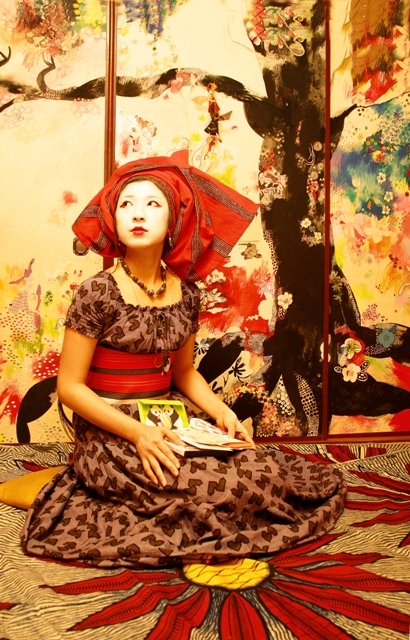 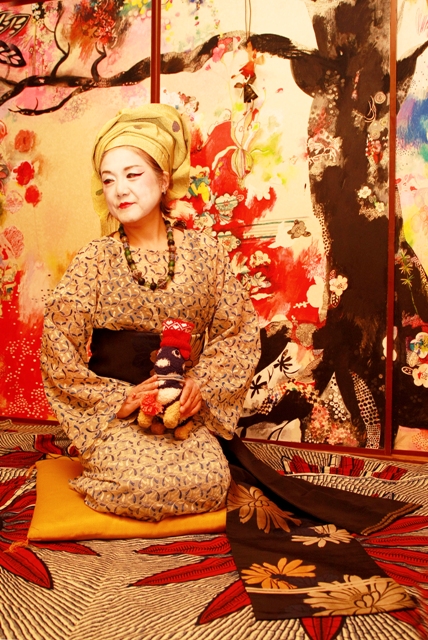