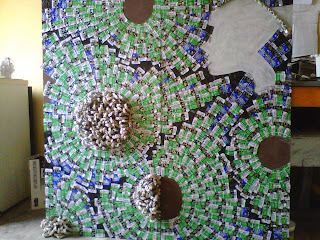 This is my most recent piece still work in progress as you can see. Had done smaller pieces of 2x2 feet but I'm convinced enough to blow them up now. This is 4x 4 feet.

When i sat back to take a look at the work pretending I'm the audience ( very hard to do ) the first thing that came to my mind was " all that glitters is not gold" a popular saying that speaks of deceit. The photographic film canisters (opened and flattened out) are all bright and shiny so can't help but catch your fancy, like the works of Shonibare and Warhol. 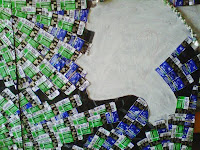 My change of name series addresses materialism and attraction to all that's beatiful but there's the pain that comes with getting it. I would give a better explanation when the work is complete, at least this first piece, cos i look forward to creating up to ten of this series God helping me, my job is taking most of my time but not all so I will get them done. See you at completion.
Posted by taiye idahor No comments:

WELCOME TO MY WORLD 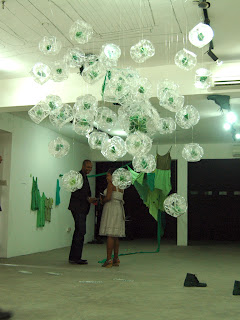 This is a "cubic" continuation of the the paper cubes but this time made from one of the objects I collect. Since i started collecting paper i decided to collect other things that are available in large in numbers at enough to build something with. from a younger age I always had issues throwing stuff away i felt it could be reused instead of throwing them away and end up someplace without being recycled. Till today I'm conscious about whatever i buy so i don't accumulate stuff at home and create less waste to the already filthy environment. Thank God Lagos is changing.
Waste is created everywhere and all the time and nobody cares about the consequences of buying something as little as a ball point pen or biro as we call it.
Lagos is ever changing with an ever changing culture caused by the modern society it’s enveloped in through heavy influence from the media and at great speed imbibing its ways.
My new work/ series aims to challenge and questions the notions and reasons for this change but especially pointing a finger directly at the materialistic culture it has acquired and the ignorance of its consequences.
This work was created for a group show titled the " The Green summary" It was organized by the center for contemporary art Lagos. It held to celebrate the organization's anniversary as well as the country's. We had a color restriction to green. 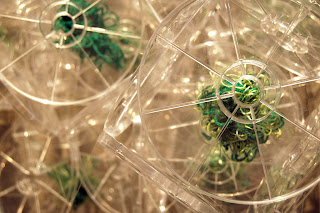 The welcome to my world installation deals on individual space and limits we have as human beings and especially those created  by the society and the system we run as a nation. People have different limits some more than others and others little to none, we are surrounded by an invisible wall that exist in our minds its as though everything is within reach because of what we watch on television and all we hear about the industrialized society. The round plastics are gotten from CD rolls and of course an imported product, are a metaphor for the deceit we receive from foriegn media of how life is greener on their side creating the migration of a large number of people from Africa abroad in search of this space without borders or walls, to create a territory with out limits. 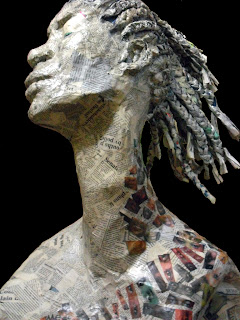 I created Evbako in 2009 its about 3ft, a bust sculpture of a woman, my portrait of Nigeria, with eyes and mouths on her neck and shoulder creating a sort of discomfort. People outside Nigeria say so many things about life here and a lot exaggerated, creating this uneasy feeling about being Nigerian. Yes we do have our problems and so does every other country, and as a young Nigerian its takes hope and faith to get by. I'm amazed at the speed I used to create this work and I'm searching for it again,it took me just 3 weeks laying layers of paper over layers.  i put it in for an competition organized by the African artist foundation titled "Nigeria at 50". It didn't win but made the 30 finalists, an exhibition and I got a great response of which I still do even though its no longer in my possession ( with regrets).  I'm working on a second one at the moment, its really taking a lot of time, I think I'm stuck in the form some where but I'll pull through and I doubt its ever going to leave my studio cos I love it already. 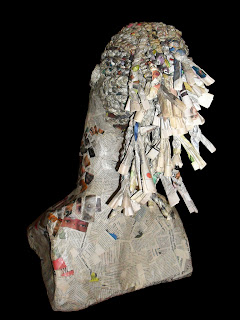 What I love most about the work is her hair, that was the best part in creating it. People don't do weaves much these days, even though its hidden underneath the weave on and Brazilian hair ( that thing is so expensive, i cant believe women pay so much for hair). I'm blessed with beautiful hair and daily I'm reminded by people on the bus, in the streets, shops, some in a nice way and some who give you a head massage straight away without asking if I'm interested. Taking up a project with hair seems a very interesting path to take and may lead to different directions. Just started my Afro series, pictures will be up as soon as i get my camera working again.

And if anyone's asking the meaning of that name, the sculpture title, it actually doesnt make sense from what my mother says. My mom is a typical and thick benin woman, and I remember calling her up just before I sent my entry for the competion cos I love culture and I had decided to name any sculpture I make with a benin name I guess to make up for my not being able to speak my language fluently (sad). Months later after the work was made and even sold, we got talking can't remember what about but then the name came up, and she looked at me strangely as though I spoke gibberish. Then i realised that the 40 mins I spent on the phone that afternoon I called to get a name that fitted my sculpture was a total waste of time. But there's a lesson here, my children must and must speak a local dialect very very fluently.
Posted by taiye idahor 1 comment: 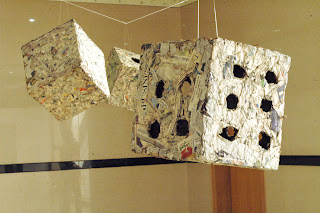 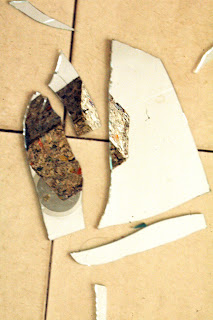 My cubes are a huge inspiration for my recent works. The project started sometime in February of 2010 and they are the very first work from my artist career, I am very proud of them.
My sister had this tall pile of newspaper and I had also collected a much taller pile about 9 feet of piled up paper from a friend. his dad had been keeping them for so long and refused to give them up (old people, my dad does exactly the same, still trying to convince him to let go of some old large glass bottles).
As a broke young lady with tools and paper, I got building at least I could afford glue. A total of 8 cubes were made and it was and still is an interesting piece that speaks on life in Lagos where everyone lives to chance and probability, a game of chance, whatever life hands to you, you make do of it and adjust. Its hard to plan in this part of the world or rather its discouraging because the system we have is quite volatile and very unstable. Its hard to project the future even though you have it all written on paper but then not impossible it takes hard work and the grace God.
I'm trying to re create the installation again, the initial cubes are weak and old now but then it only adds element to my point, many ideas all gone old and not achieved, forgotten dreams.
Creating the cubes takes a lot time especially the drying time, plus I am very slow in work cos I can be quite meticulous. Two cubes are ready and I'm aiming at 12. And hopefully create another life size image.
Posted by taiye idahor 1 comment: